The Purloined Letter no.2 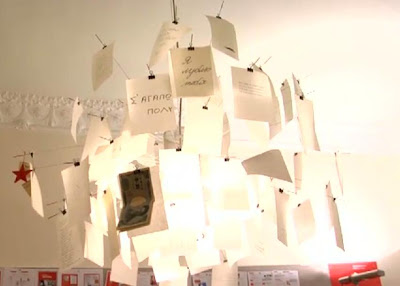 HELVETICA (GARY HUSTWIT)
00:05:42 Massimo Vignelli
“I don't think type should be expressive at all. l can write the word 'dog' with any typeface and it doesn't have to look like a dog. But there are people that think when they write 'dog' it should bark! What Helvetica is: it's a typeface that was generated by a desire of having better legibility. lt is a modern type. lt is a very clear type. lt's good for everything, pretty much. You can say l love you in Helvetica. And you can say it with Helvetica Extra Light if you want to be really fancy. Or you can say it in Extra Bold if it's really intensive and passionate, and it might work. You can also say l hate you. l can write . . . l certainly can write a few letters in Helvetica saying that . . . to Washington D.C. in particular, if l can put it that way. When Helvetica came about, we were all ready for it. lt just had all the right connotations we were looking for, for anything that had to spell out loud and clear: modern.”
00:12:07 Wim Crouwel
“Helvetica was a real step from the nineteenth-century typefaces. lt was a little more machined, it was doing away with these manual details in it, and we were impressed by that, because it was more neutral. And neutralism was a word that we loved. lt should be neutral; it shouldn't have a meaning in itself… the meaning is in the content of the text, not in the typeface. That's why we loved Helvetica very much.”
00:28:07 Leslie Savan
“Governments and corporations love Helvetica because on one hand it makes them seem neutral and efficient, but also the smoothness of the letters makes them seem almost human. That is a quality they all want to convey because of course they have the image they are always fighting that they are authoritarian they're bureaucratic, you lose yourself in them, they're oppressive. So instead, by using Helvetica they can come off seeming more accessible, transparent, and accountable, which are all the buzzwords for what corporations and governments are supposed to be today. Now they don't have to be accessible or accountable or transparent but they can look that way.”
Αναρτήθηκε από kaloulis